The strange power of camping is open to everyone. Perhaps this has something to do with removing the familiar and replacing it with rocks, fields, and streams. Recreating or rearranging elements of home life in an unfamiliar environment can have a profound and mysterious effect on our thinking processes. Such was the case for Aleister Crowley, the infamous British occultist, ceremonial magician, sexual libertine, writer and Ozzy Osbourne lyric inspiration who looked in later years like Uncle Fester from The Addams Family. Crowley was not a nice person. He once baptized a frog and named it Jesus Chris before crucifying it and eating its legs for dinner. He took part in orgies and wrote poems about necrophilia and bestiality, and once professed his desire to make love with a duck. Crowley, in other words, isn’t someone you’d ever want to bunk around with at a KOA Kamping Kabin. Still, the man who stares out from the cover of the Beatles’ “Sergeant Pepper’s Lonely Heart’s Club Band” (he’s the bald man on the top row, second from the left) deserves mention because he claimed to have increased his powers as a “magus” just by camping out in the woods. 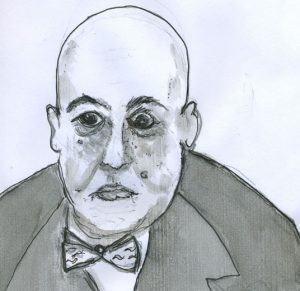 Crowley, often described as “The Beast,” or the “Wickedest Man on Earth,’’ underwent a transformation while camped on the uninhabited Hudson River island of Esopus in Dutchess County, New York in 1918. The writer William Seabrook, who observed Crowley’s departure for the camp-out first hand, was dismayed when Crowley loaded a boat with fifty gallons of red paint and a coil of rope as his camping provisions. Crowley brought no food. “He’d blown every cent’’ for the paint, Seabrook observed later on. Crowley had consumed some disgusting substances as part of his “black magick” rituals but even he could not drink paint. Still, it sustained him, indirectly, when he attracted the attention of curious farmers by splashing the island’s bare cliffs with blood-red slogans, including his motto, “Do as though wilt.” These kindly folk rowed out to him, saw that he was hungry, and gave him all the corn, eggs and milk he needed. Nourished in this way, Crowley isolated himself, concentrated, and entered a state of meditation so profound that he accessed “a chain of (his) past lives that progressed karmically to his present status as Magus and prophet,” according to his biographer Lawrence Sutin. [1]

Later, Crowley tried to demonstrate his newly increased magical powers during a bizarre incident in Manhattan, in which he fell in line unseen behind an oblivious pedestrian on the street. Crowley synced his steps with the man, and then he stumbled on purpose. Immediately the man in front of him – who apparently had no idea Crowley was there – stumbled and fell in exactly the same way as Crowley. If this story is to be believed, Crowley used the powers generated by his camp-out to knock somebody, literally, off his feet. The incident, weird and marginal as it may seem, speaks to camping’s enduring and transferable power to change the world in majestic as well as small and creepy ways.