On this busy election day, I thought you might take a moment out of watching those polls (relentlessly, joylessly, fruitlessly) and take a look at this brief travelogue. The bottom line is, I got off extremely easy. No power loss in my part of the city, and no flooding. Yes, I saw some harrowing things — gas rationing, traffic lights bopping and pitching in the gusts, awnings blowing down, and bits of brownstone falling off various buildings. But the bottom line is, I ended up in NYC for three additional unscheduled days, which is  kind of like throwing Br’er Rabbit in the briar patch. The hard part was knowing that a number of my friends were either in harm’s way or undergoing severe hardships ranging from electrical outages to flooding and gas rationing. 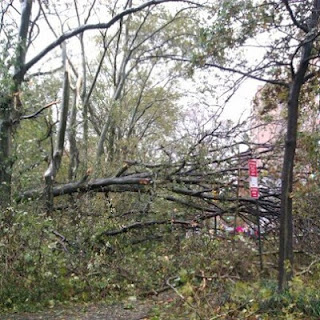 Walking out of our temporary residence, we saw some scenes of devastation including downed trees in front of the American Museum of Natural History. In fact, there was so much tree-carnage that we could barely get from one place to the other, as you can see below. 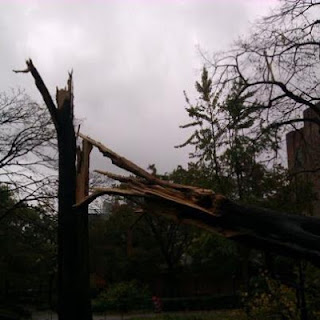 We checked in on friends and colleagues to make sure we were OK. Unable to leave home for Santa Cruz in time for Halloween, we decided to improvise, making an on-the-spot costume for my daughter, J., and hitting the streets for some candy. Remarkably, most folks seemed enthusiastic about the holiday, even though they had every reason to hide out in their apartments and not answer the door.  We even stopped by Obama’s headquarters for some Halloween candy, although, as you can see, the president was a bit too busy to go trick-or-treating with us on this particular day. He was calling people up, household by household, trying to get the vote, and had no time to partake of waxy fangs, lime Lifesavers, banana Laffy Taffy or any of that other nonsense. 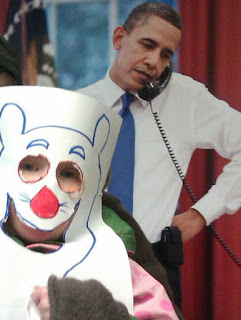 Walking around New York City shortly after the storm, I noticed that many businesses were still closed, while quite a few die-hards (or at least a few die-hards located in some of the more mildly or lightly affected areas of the city) soldiered on and stayed open, including the Ding Dong Lounge, which posted this hopeful, rain-washed message in chalk outside its main entrance: it reads: “Ding Dong Lounge: You don’t have to work tomorrow. Get drunk.” 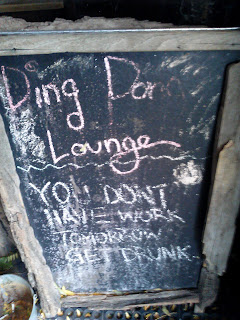 Tentatively exploring the city the next day, I ran headlong into that crazy scene with the giant crane hanging off the side of a building.(crane photo courtesy of ABC’s online news site) 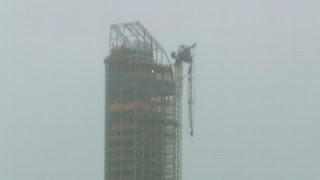 We finally left on Thursday. On the way to the airport, we saw a line on the Jersey side of the Lincoln Tunnel, the traffic backed up as long as I could see. Many of the cars had just a single passenger; without power in their homes, the drivers did not get the message about the three-passenger minimum, so many of those people must have gotten turned away at the tunnel. I also saw a ridiculously long gas line, going on for blocks and blocks and blocks, with a single nervous-looking police officer standing by at the pumps.

Hoping to return to New York very soon, under easier and happier circumstances for the city. It will be a long time before I forget the patience, calm and good humor of all the people we met during that strange and rainy week. And in case you are wondering, that is a poster of Obama, not Obama himself, lurking in the background of that photograph. (We did not actually get to meet him, nor was he in NYC on that particular night)