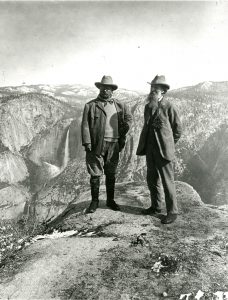 I have a piece up today in the Washington Post about the art of political camping and the use of the outdoors as “stagecraft.” As one of my friends pointed out to me, those pictures of a bare-chested Putin fishing and doing other “manly” things in the outdoors is a 21st century answer to this. Here is the link to this new piece, entitled “When Camping Was Serious Politics.” It  focuses mostly on Theodore Roosevelt and Warren Harding. I will have a longer update for you soon, I hope. I have been working on a whole bunch of shorter pieces, and have been rolling them out little by little, including, most recently, a detailed interview with George Saunders about Lincoln In The Bardo, as well as my cautionary report in Outside magazine on the high snowfall and snowmelt-related dangers on the Pacific Crest Trail. I have a bunch of other things that are also in the works and I will point you towards these things as they come out. I have not gone camping in a long while but I have a very ambitious trip planned for later in the summer; I’ll let you know how that one turns out. Meanwhile, good camping to you, and let me know if you’ve discovered any interesting places for your latest wilderness adventures. (It is nice to live vicariously.)