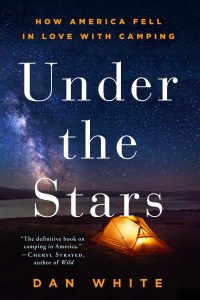 hi everyone. Thanks for a great summer for Under The Stars. The build-up to publication was very hard for me because of the loss of my father (he passed away just before the book went to print, after a long and heartbreaking illness and two hospitalizations) and also the sudden loss of Steve Watts, who I’ve gotten to know in the course of preparing the book. Steve had a tremendous amount of respect for Native American traditions, woodcraft camping technique, and recreational camping history going back to the early 19th century. Like my father, Steve got a hold of an early version of UTS and was very enthusiastic about it. I was looking forward to following up with him and checking in after the book came out. The last thing he ever said to me was “Some day by the campfire.” In honor of Steve, I’ve been signing a lot of books with that phrase.

I am pleased to bring you the news that Under The Stars will be released in paperback version in mid-June 2017, with a lovely quote by Cheryl Strayed on the cover. By the way, the paperback version of my book will be released at roughly the same time as the nonfiction book debut of Amy Ettinger (who happens to be my wife.) Her book is called The Sweet Spot, an immersive and hilarious history of ice cream in America. So I wonder if we’ll do competing book events. Or get double-booked accidentally at the same venue on the same evening. In all seriousness, summer will be a very exciting time for both of us, and we both hope to see you out on the book trail.

The entire summer was hectic and exciting. The book tour was great, and very eye-opening. As I’ve learned on the road, it’s great to give readings to family members and friends, and it’s wonderful to give readings in front of people who have read and enjoyed your book before the book talk. But if you really want to have a successful book reading anywhere in America, please follow my advice and dole out free alcoholic beverages from big coolers if the bookstore is OK with it. The other option is to give a reading that is either adjacent to or downstairs from a bar. Maybe it’s just me, but my readings always seem to go much better when the people in the audience are sozzled on DIPAs or Fireball Cinnamon Shots. It makes a big difference in terms of audience participation.

It’s impossible to know if a book will get any notice or just sink like a sodden plank. I was very surprised and pleased to see such positive write-ups in The Wall Street Journal, the New York Times, Library Journal, Oprah, Travel and Leisure and many other venues. (I’ll include hyperlinks to those reviews when I’m feeling a touch less lazy than I am right now.)  And I’ve gotten a heap of emails from members of book groups who have organized Under The Stars-themed gatherings in various places across America. I hope that continues. My first book, The Cactus Eaters, provokes  constant arguments (if not outright brawls) between people who really love that book and have read it multiple times and people who just want to fling it out the window. In contrast, the Under The Stars book seems to be bringing people together to eat and talk and reminisce instead of hurl food at one another. So I consider that a nice step in the right direction.

I have some events coming up that you should know about.

Under The Stars book group meeting at The Bookstore Plus (via Skype)
7:00 pm EST
2491 Main Street, Lake Placid, NY

I hope to share more tidbits about historical camping, survival or “needful” camping versus recreational camping, the first known ‘campsite’ in America dating back 13,000 years ago, and a few elements that I’d like to elaborate on in the coming months. See you all on the book trail, and good camping to you.