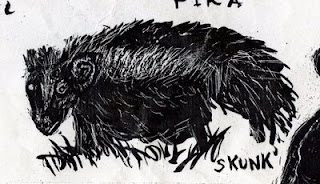 (this is my scratchboard illustration of Mephitis Mephitis, whose noxious spray can render dogs temporarily sightless.)

First of all, stumbling upon this link to an interview with Tom Waits was an unexpected boon. Plus, it’s nice to hear that someone’s car is messier than mine, and that he apparently like Valencia hot sauce, although my brand is Tapatio. A couple of other things. It’s unnerving when I read a very good book that came out a while ago without me knowing about it. One prime example is Bernard Cooper’s The Bill From My Father, as good a memoir as I’ve read in a long while. It has poetic compression, heft, authenticity, the whole shebang, and it doesn’t try to gussy up the grouchy inscrutable dad at the center of the book. Books I also enjoyed recently: Gerry Hadden’s new nonfiction work, Never the Hope Itself (I even blurbed this one! Take a look at the back cover next time you’re browsing in a book store), which is a foreign correspondent’s tale and an alluring ghost story set mostly in Haiti and Mexico. I also liked Jonnie Hughes’ new one, On the Origin of Tepees, a meme-centric look at human creativity, manifest destiny, extinction, tent design and more. I thoroughly enjoyed Robert Sullivan’s The Thoreau You Don’t Know, a feisty take-down of received notions about America’s most brilliant transcendentalist grouch. This book made me take a second glance at just about everything I’ve read about the man, including EB White’s endearing but cutesy take on Thoreau. Oh, and here’s one more. You’ve got to pick up Hemingway’s Boat by Paul Hendrickson. Tell me if that isn’t the best opening chapter you’ve read in a long time.