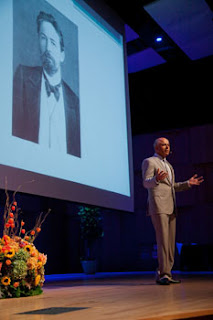 OK, sharp-eyed Cactuseaters readers. Let’s see if you can guess the identity of the mustache-wearing guy in the photo projected on the big screen behind Dr. Abraham Verghese. If you think you’ve got the right answer, send me an email, and if you’re the first one that comes in, I’ll put your name in my blog. The original version of the story included a dead giveaway, but I removed it just to make it more challenging for you…)

Anyhow, here is the link to my story on Dr. Abraham Verghese. I have an alternate and much longer version that goes into (much) more detail. If you’d like me to post that longer version as well, send me an email. Otherwise, you know I’ll forget to do it. By the way, I should point out that he broke down barriers between himself and the audience by making his presentation as informal as possible. Instead of hiding behind a lectern, he walked the stage, facing the audience the entire time, and never consulting notes of any kind until the very end — nearly 45 minutes into the presentation. I’ve never seen anyone pull off such a thing before with the sole exception of Malcolm Gladwell, who lectured note and Teleprompter-free, and in great detail, when he visited Columbia University some years back.
(photo by Steve Kurtz.)
http://cactuseaters.blogspot.com/feeds/posts/default