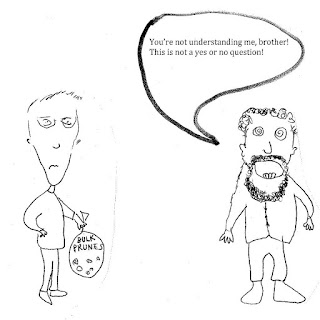 Alternate title: “Some idiot just tried to mug me at the Food Bin”

You won’t believe this. On Sunday at 1:30 p.m, I was set upon by a loud, anti-Semitic, near-toothless mugger, right in the middle of a health food store. To be precise, he tried to mug me in front of the shriveled apricots.

That afternoon, I stopped by the Food Bin & Herb Room (you know this place? In Santa Cruz, California? It’s this endearing if dark and dingy little throwback of an organic food store with “like, dude” cashiers and interesting produce. ) I stopped there to get some dehydrated plums. They have really good ones there, for some reason, and just as I was loading up my little plastic bag, I saw this guy behind me with only four teeth, in the lower part of his jaw. He was probably in his early 50s with a smeary coat and a black beard.

“This is when you give me some money for a few of these goodies, brother,” he told me.

That got my hackles up right there. When a stranger in Santa Cruz calls you ‘brother,’ nothing good will ever come of it.

When I just kept on shopping and ignoring him, he grabbed me by my shirt, gave me a little shove, and he said, “You’re not understanding me, brother. This is NOT a yes or no question.”

When I brushed his hands off, and got in his face, and told him, “you’re getting no money off me, brother,” he called me a word that you generally do not want to call any Jewish person (I just so happen to be Jewish) if you want to leave a health food store with your four teeth in their rightful places. I explained to him that this was a highly offensive term and that he would now have to leave. Although he took several giant steps toward the door, he stopped in front of the bulk food aisle, at which point he indignantly told me I couldn’t kick him out “because I used to work here.”

Anyways the management finally, sort of, came to my assistance and told him he should leave and he finally did, so the whole thing came to a nice, non-violent conclusion.

I’m proud to say he didn’t succeed in mugging me, and I’m glad I told him off. So it all ended well. Still, I’m buying my prunes from Staff of Life or New Leaf Community Market next time. Security  there  is generally good, and you don’t have to worry about people shaking you down for lunch money in front of the kale display.