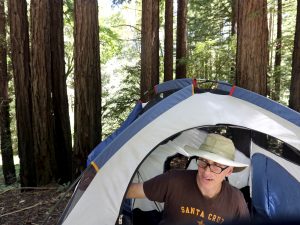 hi everyone. Thanks for checking in. First of all, I just wanted to let you all know that the Under The Stars book salon/dinner, hosted by Catamaran literary magazine (and the brilliant Catherine Segurson, who is captain of that particular ship) was a great success. I could not have hoped for more. It seemed like that event was about to crash into a barrier reef of Santa Cruz flakiness, but Laili Restaurant stepped in to save the day. We all talked and dined outside in the enclosed garden patio next to the restaurant. It was a great selection of people: a respected printer, a publisher, a legendary muffin baker, a writer and bookstore events coordinator, a photographer, a history teacher, a librarian, a newly arrived editor from New York City, and many others, some of them meeting for the first time, exchanging stories, talking long after dark. I even struck up an acquaintance, or re-acquaintance, with someone I used to interview quite often back when I was writing for the Santa Cruz Sentinel. I read very briefly from UTS and answered questions ranging from “why do you have a vendetta against graham crackers” to “how long did it take for you to figure out how to light a proper campfire”? The whole thing was supposed to end at 8 p.m. but most of us ended up staggering out of there quite a bit later than that. It was one of those moments when I remembered why we’re still in Santa Cruz. There is something here you just can’t find anywhere else, in spite of all the recent changes and challenges.

Now that the salon is over, I am going back to my hometown. I will read at the Palos Verdes Peninsula Library in Rolling Hills Estates (not far from where I grew up) at 4 p.m, Saturday, October 22. This is a very big deal for me because my late father was the one who got the word out about my previous reading in Palos Verdes back in 2008 for my first book, The Cactus Eaters. I will read briefly from Under The Stars, and then the library staff will conduct the Q and A. Then on October 23, my family and I are heading out to Thousand Oaks for a reading at their beautiful Grant R. Brimhall Library at 3 p.m.

At that point, it looks like I might get a bit of a rest break from the road, which will give me a chance to think about other projects and other ideas that I’ve been kicking around. Thank you again for your support. I’ll have more posts about historic camping, family camping in the 19th century, and other adventures soon.