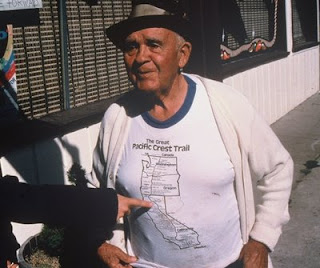 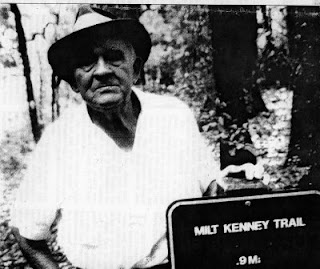 Here are two of my photos of the late, great “Mayor” Milt Kenney, who helped up to 60 Pacific Crest Trail hikers per season when they passed through Castella, California. Milt, who appears in The Cactus Eaters, would buy hungry hikers huge breakfasts and enormous Barn Buster hamburgers in Dunsmuir, near Castella. Sometimes, he would even drive them up to Mount Shasta to take a look around. Trail angels are one of the great joys of any long-distance trail. They open up their cars — and in some cases, their homes — to long-distance backpackers.You can still hike the .9-mile — and rather steep! — spur trail that is named after him. Milt is gone now, although there are plenty of new ‘angels’ who are trying to keep his legacy alive. I’ve reprinted these photos at the request of Winohiker. (notice that cool, vintage PCT T-shirt that Milt is wearing. By the way, the mysterious finger that you see is pointing directly at the spot where Castella, CA. appears on the map.)