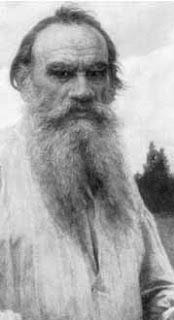 Is Count Tolstoy an unappreciated long-distance trail hiking guru? Judging from this image, he sure looks the part: the weathered features, the two-pronged frizz beard, the intensity of his gaze, and the loose-fitting shirt that covers his chest and arms so he doesn’t have to wear sunblock. Consider this piece of advice — found more than 1,000 pages into the Pevear and Volokhonsky translation of War and Peace. I think these words will hold you in good stead if you ever find yourself out on the trail, although Tolstoy, in this case, is talking about the French army after the Battle of Borodino.

“When a man finds himself in motion, he always thinks up a goal for that motion. In order to walk a thousand miles, a man needs to think that there is something good at the end of those thousand miles. One needs a vision of the promised land in order to have the strength to move … A man walking a thousand miles must say to himself, forgetting the final goal, ‘today I will walk thirty miles to a resting place and spend the night,’ and during this first march, the resting place overshadows the final goal and concentrates all desires and hopes on itself.”

Anyhow — I can’t recommend this translation highly enough. I stayed up late at night marching through this thing — and it still took me more than a month to make it from one end of the tome to the other. You might consider bringing this book along with you on your next sojourn, aiming for 50 pages a day or so, but I recommend taking out a razor blade and chopping it up into sections. The hard-back edition weighs about ten pounds.

By the way, I sent a fan email to Elif Batuman thanking her for her writings on Russian literature, which inspired me to tackle War and Peace. I told her I was having a hard time with all the footnotes and long passages in French and German. She recommended a trick she learned from Nabokov —get a hold of two copies of the book and read them side by side.