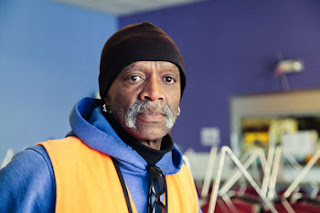 Forgive the sudden change of tone, my four loyal readers, but I have a story with serious import to share. Here is a bit of inspiration for you this morning. It’s about a man who thought he’d lost everything, only to wake up one day and realize that his life of misfortune contained a template for actual change — not just his change but other people’s, too. I interviewed him at some length on Monday and based my story on our talk, and my conversations with several other folks who know him well. Meanwhile,  mark your calendars for the Martin Luther King Jr. Memorial Convocation. And in case you missed it, here is my interview with the 2012 keynote speaker Nikki Giovanni and my story about the upcoming ceremony, featuring activist and educational activist Robert Moses. And yes, it goes without saying that I will be there at the ceremony. (photo by the talented Carolyn Lagattuta) And by the way, if you are on hand to congratulate Stephen, keep in mind that the pronunciation for his first name is unusual. It is pronounced Steh-FONN, with strong emphasis on the second syllable.