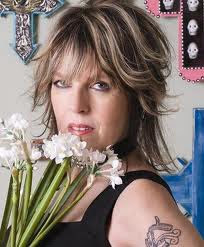 (sorry, I keep updating this danged thing. Little details keep incorporating themselves into the story. Scroll to the bottom for complete set list if you’re into that sort of thing.)
Nothing against the Catalyst Club in downtown Santa Cruz but every time I go there’s some 250-pound, 7-foot tall drunk guy standing right in front of me, swaying to the music and stepping on my feet, while blocking my views of whatever band is playing that night.

That’s why it was a special treat to see Lucinda Williams“in full soaring voice” (my sister’s description) at the historic Rio Theatre on Soquel Avenue in Santa Cruz. Imagine — seeing Lucinda in a place with crisp, clean acoustics, and being able to sit down.

I’ve never seen Lucinda this good or this candid, and I’ve been going to her concerts since the days of Car Wheels On A Gravel Road (she started off Wednesday night’s concert with the title song from that breakthrough LP before launching straight into “The Night’s Too Long” from the Lucinda Williams album. The night was full of meditations about her literary influences, from Carson McCullers to Mary Karr, along with a lot of juicy deep cuts, a nice, swampy version of “Concrete and Barbed Wire,” “Side of the Road” and “Greenville.” A chilling solo version of Woody Guthrie’s “I Aint Got No Home” was part of her hard-times/recession theme, along with Skip James’ “Hard Time Killing Floor Blues” and her own “Memphis Pearl,” inspired by a woman she saw rifling through a trash can in Los Angeles many years ago.

Let’s give some credit to the talented Blake Mills (not to be confused with Lake Mills, a city in Wisconsin), who played beside her, and was much too good — too precise — for me to call him a mere “accompanist.” Mills, a Venice, California-based singer/songwriter, was bold enough to include a cover of a Lucinda song — “I Just Wanted To See You So Bad” — in his solo opening set, along with some of his own standouts like “Hey, Lover.” Mills is a thoughtful, flexible interpreter of Lucinda’s songs. All the arrangements were faithful to the material but he never overpowered it, like some of Lucinda’s overenthusiastic pickers from the distant past. His playing and singing always heightened the emotional impact of her voice and lyrics without ever gumming up the works, whether he was charging through . “Honey Bee” and “Change The Locks,” or plucking a 10-string tiple for songs like “Well, Well, Well.”

Lucinda responded with a combination of tact and mischief to shouted-out audience requests. When someone bellowed for “Lake Charles,” she smiled, raised her eyebrows, and said, “Another song about a beautiful loser. Here’s another one.” Then she launched into “Pineola,” her tribute to the Frank Sanford, “a brilliant young poet” who committed suicide in 1978. Once, during his rave-up at the end of “Pineola,” I heard someone in the audience grumble that Blake Mills was “too blaring and loud” toward the end of that song– but if you know “Pineola,” you know that it has to be there; some painful truths require a lot of feedback and amplification. (At the end of Mills’ solo, Lucinda laughed and said, “You’re trying to blow me off the stage with that thing!”

Besides, in past Lucinda concerts, the band, if anything, was too faithful to the records. Sometimes they sounded like a note-for-note mock-up of the records, only breaking out of their little boxes during the long, overly noisy solos. I think the ‘duo’ format gave Mills and Williams a lot more leeway. Last night they could get a little loosey-goosey with the arrangements in a way that made the songs surprising and more powerful than the full-on rock-band treatment ever could.

The stripped-down arrangements brought out song shadings I’d never noticed before. The drawn-out, repeated vocal at the end of Randy Weeks’ “Can’t Let Go” seemed desperate and pathetic and funny at the same time, with Lucinda playing the role of a jilted lover who couldn’t acknowledge defeat. She ramped up the laughs by turning the song into a commentary on GOP candidates squaring off against one another, falling and rising with Whack-A-Mole regularity: “Come on, Newt! It’s over but I can’t let go. Mitt, Mitt, Mitt, it’s over but I can’t let go.” The arrangements also let you focus on the sorrowful objects that make up “Bus To Baton Rouge” — a song about a pilgrimage to a strange old family house with a “piano nobody played,” and a locked room where no kids could set foot. The song made her so emotional that she had to pause and catch herself before she could launch into it. Afterward, she cryptically explained that the song came from “the side of the family where the mental illness came from. Look for them in my memoirs. I’ll have to wait until everyone’s dead so it doesn’t hurt everybody’s feelings.”

There was only one drag about the concert, and that was the almost total lack of young-ish folks. At one point in the lobby just before the set, someone shouted out, “Is there anybody here who is under 45.’ “I am!” I replied, but I noticed only two 20-somethings anywhere in the crowd. Young folks, you’re missing out.

Finally, it bears mentioning that Lucinda could seem distant and grumpy in those old late 1990s shows. Here it was like hanging out in her living room. Why the change? Who knows. I think she must be living right and drinking a lot of tangerine juice.

“Thanks for digging into your pockets and buying a ticket to see me during these tough economic times,” she said. “I really appreciate it. I hope I gave you a little something to take home with you.”

Car Wheels On A Gravel Road

The Night’s Too Long

Side of the Road

Stowaway in your heart

I Aint Got No Home

Get Right With God