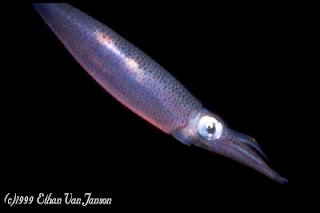 During my whirlwind trip to Seattle, I explored neighborhoods I’d never seen before and met all kinds of interesting people. But I packed so much into three days that I missed out on a few things. One of them is the mysterious lost art of “Squid Jigging.”
“Squid jigging” means catching live squid using a baited line while standing out on a pier on Puget Sound (or elsewhere) in the middle of the night. Chances are that you’ve never heard of this unusual sport, but as you will see, it even has its own hair-raising theme song, complete with a line about “poor Uncle Billy” getting spattered with “squid-juice.”
I found out about squid jigging while visiting the friendly people at the Hostel Seattle in Ballard — which must be one of the few lodging places in the world where squid-jigging is an optional activity for guests.
Hostel owner Lee Kendell explained how the whole thing worked.
“This is a squid jig,’’ he said, holding up a sparkly lure covered with barbs. In fact, it looked a little bit like my old nemesis, the prickly pear. “In the middle of the night, when the squid run in schools, you drop it in with a line and you go like this.’’
He lifted the line up and down to show me how it worked. “When the school of squid come by to attack, they catch on the barbs.’’
I did not have a chance to practice any squid jigging — in part because I was overscheduled, and in part because I’m a little squeamish (even regular fishing freaks me out a little bit.) But if you’re ever in Seattle, you can try it out yourself, so long as you buy yourself a fishing license for the day.