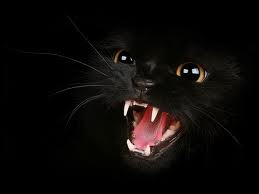 I am going to take a break from blogging for a while because typing is almost impossible right now. My cat took a huge bite out of my finger! It’s not his fault.
Here’s what happened. My cat has not been feeling well — he’s been fighting off an infection — so I had to go to the vet in San Jose and get these gigantic, stinky brown pills for him. You wouldn’t believe the size of these pills. Maybe they thought I said “moose” instead of “cat.” Anyhow, he refuses to eat them on his own, even if I stick them in a “pill pocket” that is made out of smelly cat food. Following the doctor’s instructions, I had to stick the pill directly down his throat and push. That meant opening up his jaws, gently nudging my finger beneath his razor-sharp teeth, and inserting the pill into his throat and pushing it down there without choking him or having him bite my arm off. After several tries (and a pretty huge bite) I finally succeeded. And then I looked at the jar and realized that I’ll have to the do thing every single day for the next freaking week! I have newfound respect for people who own tigers and lions and servals.