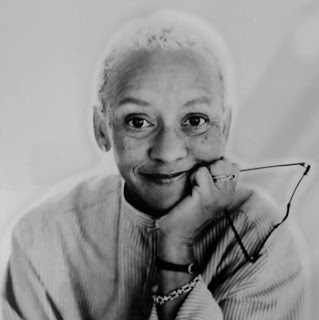 Here it is. I wrote this up to spread the word about the upcoming Martin Luther King Jr. Memorial Convocation in Santa Cruz. I hope you enjoy this. By the way, I have a few more Q and A’s set up with various nonfiction and fiction writers so stay tuned. I’ll write and post those when I can.

Poets and grandmothers in outer space: A Q&A with Nikki Giovanni

King’s assassination, and his memorial service, which she attended, inspired some of her earliest published works. She has the authority and credibility of a ’60s activist from the front lines of the civil rights movement. Giovanni also has an insurgent sense of humor and the delivery of a seasoned stand-up comic, breaking up audiences with her incisive wit and deadpan expressions.

Giovanni had a free-ranging conversation with UCSC News & Events about her memories of King, her 20-year friendship with Rosa Parks, the importance of bearing witness, America’s great economic divide, and her wild dream of sending poets and grandmothers into outer space.

You are a National Book Award finalist for your autobiography, and your children’s book about Rosa Parks received Caldecott honors, but poetry is your enduring love. How did you choose poetry as your art form?

It’s always been with me. That’s how poetry enters your life—your mom, your aunties, and your grandmothers do these little rhymes for you. Some of us keep it, always, and some of us, unfortunately, push it out of our lives. We’re told it doesn’t matter. We’re told we’re soft for reading and writing poetry. My students ask me, ‘Can I write poetry?’ I tell them, ‘Of course you can! You just can’t make a living on it.’ But that’s not why we write it. We write for joy. I’m not going to say you don’t need money. Look at me. I’m an old woman. You need food, your dogs need shots, but there’s a limit to what money can do. Money is totally out of control right now. There’s nothing wrong with being rich, but there’s something seriously wrong with being a billionaire.

Do you support the Occupy Wall Street movement?

I’m a ’60s person. We were allowed to do our sit-ins, and I think they should be allowed to do their protests. I enjoy watching the Occupy movement because they are saying, ‘Something is wrong, but we are not powerless.’ They are all about changing the conversation, and that is incredibly courageous. That was what we were trying to do during the Vietnam War.

You often talk about following your own conscience regardless of public pressures.

Well, I’m not a big fan of going along with the mob. I resented (House Majority Leader Eric Cantor, R-Virginia) when he called the Occupy movement a mob. Mobs lynch people and throw bricks through windows and burn things. Eric, where did you go to school, baby? Occupy is not a mob. We have a right to peaceably assemble. That’s not a mob. That’s citizens doing their job.

Speaking of nonviolent resistance, you were a friend of the late Rosa Parks, and an acquaintance of Martin Luther King Jr. You’ve often said that Parks should loom larger in the American memory.

I like to wish people a happy Rosa Parks Day, and when they look at me and say, ‘I didn’t know there was a Rosa Parks Day,’ I tell them, ‘There should be.’ I had the pleasure of knowing Dr. King. We weren’t friends but he knew who I was. He’d say, ‘Hi, Nikki.’ (Laughs.) We’ve got this great big statue of Martin now, but without Rosa, we would not have had the occasion to meet Martin. Martin was not calm. He wanted to get things done. He had the urgency of ‘now.’ But Rosa had that calmness. You always felt that whatever was going to happen, it wouldn’t be so bad with this woman around. Rosa Parks would never have given a ‘March on Washington’ speech like Martin did, but on December 1, 1955, she said, ‘I’m going to take my seat today.’ Let me be clear. Martin was a minister. He was used to leading. His father, his grandfathers, were all ministers, but it is the Rosa Parkses of the world who gave him his handle. The Rosa Parkses of this world provide the Kings of this world with the opportunity. Martin couldn’t have just said ‘Let’s have a boycott.”

It’s clear that you value the importance of courage in everyday life.

You’ve taught creative writing for decades, and you currently teach at Virginia Tech. One of your former students is Nikky Finney, who won a National Book Award for poetry. I’m hoping you can share your writing and teaching philosophy.

What I say to my students is, ‘Write what you know.’ They don’t realize that it is so clear when they don’t know what they are talking about. I have a friend who likes to write English novels, and I’m thinking, ‘No, baby, you don’t know anything about it. The British write English novels!’ You are your own muse. I know I have some students who think I don’t care because I always look and say, ‘That’s good.’ The whole world will find something wrong with your writing. It takes a certain commitment to say, ‘This is good,’ and a certain level of faith to say, ‘If she says this is good, and I respect her, I can build on that.’

In your own words you are a “Black American, a daughter, a mother, and a professor of English. You have earned 25 honorary degrees and have received the Rosa L. Parks Woman of Courage award. Is there anything else you’re still hoping to accomplish?

Well, I am a big fan of space, and I am incredibly sad that every penny we put into (the war in Afghanistan) could have been used for space travel. If I were a young man going into outer space, I would be so nervous, so why not send a few grandmothers into space? I would go, by the way. People will say, “But Nikki, you won’t come back!’ I’d say, ‘look, I’m 68, I’m going to die anyway.’ Let’s send the poets and the grandmothers. That would be my ideal space crew. Maybe throw in a painter and one songwriter, and we would need to get a cook. We’d have a good time, and if we survive, wonderful. If we don’t, we’ll have taken a great route to that next step. We don’t know very much about death because some of us don’t know very much about life.

Speaking of fate and circumstance, do you ever wonder what you would have done with your life if you hadn’t become a poet?

I am compulsive. I could have opened a cleaning business. I would have called it Nikki’s Cleaning.