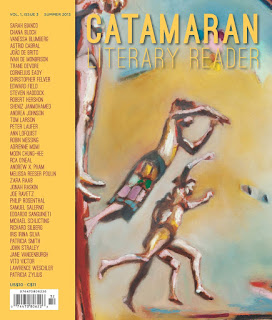 I’m hoping you’re all getting your hands on the latest issue of Catamaran (which is analog-only, by the way, and you’ll see why when you get your hands on the magazine. Reading it is a very tactile experience.**) And thank you to all the great feedback and messages about the new issue. Catherine Segurson did a beautiful job with the design and layout; you will not find a more beautiful-looking lit magazine anywhere. Here is a brief excerpt of my interview with Lawrence Weschler, “Convergences, Chance Discoveries, and Going Back to Kindergarten,” featured in our summer issue. Weschler has been a staff writer for the New Yorker, and finalist for the National Book Critics Circle Award for Nonfiction and the Pulitzer Prize for General Nonfiction. Of late he has directed the New York Institute for Humanities at NYU. Here he is describing an ongoing artistic disagreement between the artists Robert Irwin and David Hockney:

“Sometime later I happened to be writing a catalog essay for an upcoming Irwin show, which in turn was very consciously on Irwin’s part a refutation of Hockney. And the two of them have been going at it like that for thirty-five years. I write about one and the other calls me and tells me, “Not true.” I write about the other one, same thing. This goes on and on, and, yes, as you say, they have never met. The thing that’s fun about it is that it’s not a stupid argument they’re having. They’re having a very deep and interesting argument.”

Hope you are having a great summer. Chances are I’ll see you out on some campground somewhere, as ‘the camping project’ continues in earnest.

*** however, an e-reader version is in the works. Not sure when that’s coming out.