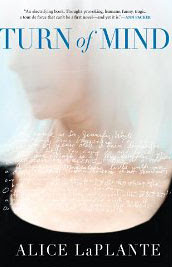 You (my one reader) have carped.

You claim that I’m giving you too many dark and unsettling book recommendations. Too much old age (Emily Alone), too much bigamy (Silver Sparrow) and romantic regret (Say Her Name.).

Well, here’s another dark one, but maybe you should read something uplifting and zany before making your descent into Alice LaPlante’s Turn of Mind, a novel written from the perspective of a former surgeon, long retired and speaking through the clouds of advanced Alzheimer’s.

This is a story about an aging woman’s “half state” existence, and her “life in the shadows.” Does this sound like a bummer to you? All I know is that I’m hooked.

I just started reading Turn of Mind this week; that’s why I had to (politely) shush someone in the audience at the Capitola Book Cafe, where LaPlante read on Thursday evening; I feared she was about to spoil the ending. Don’t look for chapters here; LaPlante wrote this book in short blocks of prose with ominous white spaces between them; it’s like looking at rocks through a fog. LaPlante’s reading was unsettling; you get a strong sense of disorientation and unfamiliar faces. You sense the former doctor casting her clinical eye on details she never noticed before; she’s held onto her analytical powers, even as her mind erases its own memory cues. The doctor must delve into her surviving memories, and her notebooks, to help her understand why people react to her so strangely. “I bitterly accept that I’m famous, beloved even, among strangers,” she says, “a legend in my own mind.”

LaPlante, the author of several well-regarded texts about the writing process, could have chosen any number of ways-in for this novel, but she threw herself into the story by writing from the perspective of Dr. Jennifer White. This created a challenge: how do you get inside such a character’s mind without leaving your readers confused and left behind? LaPlante solved this problem by drawing freely from the “unreliable narrator” tradition (at the Book Cafe, she mentioned Nabakov’s brilliant but morally suspect Humbert Humbert in Lolita, and Ken Kesey’s hallucination-prone “Chief” Bromden in One Flew Over the Cuckoo’s Nest.) Like Nabakov and Kesey, LaPlante makes sure to leave some touchstones to help the reader. Though the main character’s grip on reality loosens throughout the story, LaPlante is kind enough to leave a few reliable sources for us: some notebook entries, written before the onset of White’s dementia, and a cast of supporting characters who (unlike White herself) can be taken at their word.

By the way, if my recommendations are making you sad, you can always send a funny recommendation. I’m open to suggestions, but I won’t blog about it unless I like it.