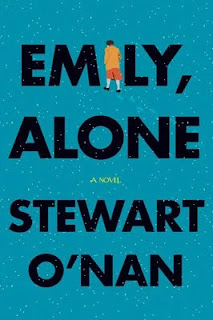 Here are a few new or new-ish books that you — both of you — might like.
Stewart O’Nan’s Emily, Alone is marvelous. In this slender book, old people live in an in-between world. Just driving across town — braving roundabouts, moving in and out of tight garages in a big clunky boat of a car — is an Odyssey in itself. Emily, the title character, lives in a crooked piece of time. She’s trying hard to hold on to her routine, her memories, and her vitality. At the same time, she’s moving toward resignation. At one point in the story, Emily is filling out holiday cards, a task she despises but can’t bring herself to give up. She glances at her address book and notices a near-perfect split between the list of friends who are still alive and those who died years ago, or moved away. It’s just one of the many quiet and powerful moments in this book. Reading through this, I asked myself, “Why hadn’t I heard of this author before? Looks like he’s written many other books before this. Who has been hiding him away from me for all these years?” 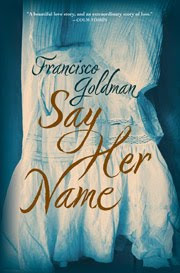 I’ve just started Say Her Name by Francisco Goldman, who recently spoke at the Capitola Book Cafe. In just a couple of lines, he sets up the story: from the first few opening lines, we know (in this autobiographical work of fiction) that the protagonist has lost his much-younger wife in a freak accident and that her mother blames him for what happened. Then, flip the page and see how the narrator particularizes their relationship with a description of an axolotl, “a species of salamander that never metamorphose out of the larval state, something like polliwogs that never became frogs.” We learn that Aura, the young wife, was fascinated by these creatures, and loved a famous short story by Julio Cortazar in which an axolotl, and a man staring at the creature through the glass of a terrarium, swap souls; the man is trapped behind the glass, and the axolotl, in its new human skin, walks away. It’s a strange and beautiful way to begin this story about love, grief, art, and identity slippage. Sarah Bakewell’s How To Live is a terrific introduction to Montaigne, his essays, his adventures, friends and antagonists. I plowed right through this so quickly that I wanted more. Maybe the paperback version will include an addendum chapter in which Bakewell maps out one of those crazy, rambling, shape-shifting essays from beginning to end, stop by stop, like a tour guide. Speaking of “tour guide” and “shape shifting,” Karen Russell’s book Swamplandia is a jungle-boat cruise through an enchanted bog. All for now.
Also, here’s an addendum: one of my readers told me that she didn’t want to read Francisco Goldman’s book because “it’s about some lady who turns into a salamander. That sounds scary to me.” That is a bit of a misreading of my blog post. His book only refers to salamanders (in a specific context) in that one scene. It is about the arc of a relationship and coping with loss, and while the book does have some fantastical elements, the work, as a whole, is most certainly not about amphibians.
http://cactuseaters.blogspot.com/feeds/posts/default