Dear camping friends: my book, Under The Stars, combines my own experiences in the wild with the history of outdoor recreation and the stories of the men and women who made their way into the forests of America seeking happiness and renewal.  I had to make some draconian decisions about who to include and exclude from the final line-up of “heroes of camping” in this book. I simply could not find space for all the stories I wanted to incorporate — including this tale of a fearless grandmother who conquered a long-distance footpath without any fancy gear, and with no preparation whatsoever. 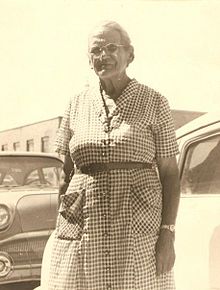 If you are ever tempted to go on a long camping trip, but worry that you can’t afford a carload of fancy new equipment, consider the story of Emma “Grandma” Gatewood, who hiked every inch of the Appalachian Trail for a grand total of a hundred dollars and with no creature comforts of any kind. In 1955, when Gatewood was 67, she made a pack out of denim pieces, brought a comforter instead of a sleeping bag and set out to conquer the AT. It took her 146 days and seven pairs of shoes.

Gatewood, who had eleven children, and was actually a great-grandmother, had false teeth and a pair of shattered, ill-fitting spectacles, but she didn’t let that stop her.

Instead of a fancy backpack, she carried some clothes draped over her shoulder in a homemade gunnysack. She carried a blanket instead of a tent and a sleeping bag. Orienteering skills? She had approximately zero. Out in the woods, she got lost frequently. Sometimes she kept warm by curling up next to the rocks she pulled from her campfires. On long hikes she sucked on salty bouillon cubes for energy. In a thru-hiking culture where young men dominate, Emma Rowena “Grandma” Gatewood conquered the Appalachian Trail all alone at age 67, increasing awareness of this legendary footpath, and drawing concern about its poorly marked, badly maintained stretches.

Gatewood got the idea to hike the AT from browsing through a magazine one day. The thought came to her unbidden. “It would be a nice lark,” she told herself, and that was enough. Was her sense of direction always perfect? Did she sometimes find herself in pickles requiring outside intervention? Grandma Gatewood made no claims about being the perfect survivalist or wayfinder. But Grandma Gatewood had something that made up for her total lack of dead reckoning skills. She was like a bloodhound. You could not shake her off!

She must have known that nothing she encountered in the wilderness would be half as hard as what she’d lived through in town. Her life before the Appalachian Trail was a catastrophe.  Her biographer, Ben Montgomery, described the suffering she experienced at the hands of her abusive husband.  No wonder she wasn’t spooked very often on her trek. “(M)ost people get scared when they come up against an animal,” she once said. “And right away they have to make a fight out of it. Animals won’t attack you unless you corner them. Fiddlesticks, I never even saw a bear.”

Gatewood finally saw a bear when she completed a second through hike of the Appalachian Trail, and then walked the entire route a third in sections, and then walked 2,000 miles of the Oregon Trail just for the hell of it.

All of this adds up to a dose of confidence for anyone who ever comes across Grandma Gatewood and her story. “She introduced people to the A.T.,’ Montgomery writes, “And at the same time she made the thru-hike achievable. It didn’t take fancy equipment, guidebooks, training, or youthfulness. It took putting one foot in front of the other – five million times.”