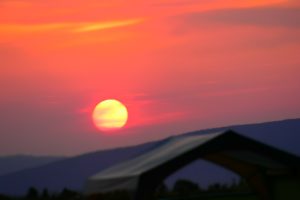 “Cupertino is the world headquarters of Apple Computer. For a few years, Sheila Ettinger lived directly across the street from the main headquarters of Apple, which, as you know, designed the iPhone. If she had wanted to do so, and if she could have gotten past security, Sheila could have stepped out of her apartment and arrived at Steve Jobs’s office in about ten minutes. But Sheila was no fan of the iPhone. She could not have cared less about gadgets. In spite of the fact that she lived so close to Apple, she had this little flip-phone, and, to be honest, I could never figure out how to use it. Her phone was a little bit awkward.  In the Stanford hospital, when people would call her up, and that old phone would ring and ring, she would tell me, “Please, Dan, get that for me,” but I couldn’t even figure out how to answer the thing.  I would press the wrong button and the call would drop out.  I’m sure I’ve hung up on most of the people who are here in this room right now.

But that phone suited Sheila because she was very old school, very analog. When you were with Sheila, she was always right there with you and nowhere else– very present, and you had her undivided attention, whether you were eating dumplings with her at Lei Gardens in Cupertino, or watching some four-hour costume-drama at the movie theater over at Santana Row, or hanging out with you in a coffee shop, listening to you kvell or kvetch about your children. All of you had an awful lot to say to Sheila so it’s a good thing she had such a great talent for active listening, and that warm way of addressing you so directly, with that warm Brooklyn accent that sounded as if she came straight out of Flatbush just a couple of weeks ago.  No one else had quite the same “Brooklyn Jewish mutha accent.” And she had an incredible ability to tolerate all sorts of personality quirks, too. She was not judgmental in that way, and I wonder if it had something to do with the fact that she was a school psychologist for almost four decades – dealing with kids who had struggled with personal circumstances, with emotional difficulties, with developmental issues, for much of her professional life.

Or it could have had something to do with the fact that she raised three kids with such different outlooks and personalities, almost as if they were characters in a novel. She’d seen it all. Heard it all. And Sheila had such a big, boisterous group of good friends with all kinds of outlooks and metaphysical belief systems. She didn’t judge.

And speaking of being present, and being old school, I want to say a couple of things about the grandma side of her. There are certain grandmothers who never really warm up to their role as grandmothers. They act as if it is a grim responsibility — a burden. And then there was Sheila, who acted as if being a grandmother were her life’s calling. She went about her grandmotherly tasks with tremendous enthusiasm, gusto, imagination, improvisation, and tirelessness. Nobody could play with the little ones like Sheila could. No one else could sit there on a couch and conjure such silly and entertaining stories, complicated plotlines, with little tea cups and Russian nesting dolls. She could do this for hours and hours and hours without losing her mind, as I would in about five minutes. Where did she get such patience for entertaining the little ones? I have no idea. Where did she come up with all these storylines for all those dolls and stuffed animals? She could take any ordinary-looking toy that came from a store in the neighborhood – TJ Maxx for instance — and make it seem like the best toy in the world, like something enchanted. She even had a nom de plume or stage name that her grandkids gave her:  Gaga, not to be confused with Lady Gaga, though Sheila, like Lady Gaga, was a born entertainer. Take a look at all the faces in this room. All the life stories, all the tsuris, the gossip, the kvetching and kvelling.

But one other thing I haven’t touched on was Sheila’s ability to help you be genuine, unguarded. Something about her just made you try harder to do right by yourself and for other people. In my case, I found that the side of myself that showed up for Sheila was the best self I had, the version of myself that I could only hope to live up to when Sheila wasn’t around me.

And I’m sure I am not alone in feeling this way.  So the challenge that Sheila leaves us now is to live up to that best self that showed up for Sheila when we knew her, and to bring that self to the rest of the world, even though we can’t whip out our i Phones and call her up on that little flip phone of hers. And it’s very sad to think about that.  But at least we can comfort ourselves knowing that we can all honor Sheila’s memory in the way that we show up for each other every day, in the same way that Sheila she showed up for us. So I am hoping that you can all be comforted with her memory, all the good times you had with her, and that spirit of her friendship, that gourmandizing, book-loving, somewhat neurotic, hilarious, unguarded, grandmotherly part of her that we will carry forward into our lives every day.”