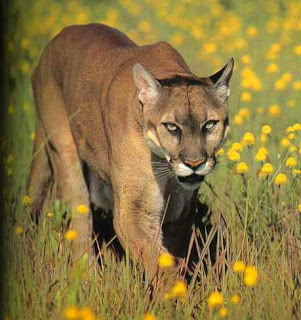 Yesterday I saw something that looked an awful lot like a mountain lion footprint on a soft dirt path heading up toward Moore Creek. Imagine the print of an ordinary house cat, but much, much bigger.

It’s possible that my imagination was messing with me. Perhaps it was a coyote print, and the coastal winds had eroded the print, or blown it all out of proportion.

But it gave me a bit of a scare, considering the huge full-color sign near the park entrance, saying KNOWN MOUNTAIN LION HABITAT, with instructions to hold your ground and fight off the beast if it goes after you. The place was deserted — no movement at all except for a few barn swallows swarming, a circling hawk, and a couple of jackrabbits. I’ve been up to the creek 20 times now, and I’ve only seen other human beings up there on two occasions. Both of them were drifters with dirty bedrolls and backpacks. This time I had all 246 acres of rocky grasslands and marine terraces to myself.

I kept on running through the deserted coastal prairie in spite of my better judgment. Moments later, something made a loud “GWARRRRRRRRRRRRRR” on a ledge just above me. I jumped right out of my shoes. It turned out to be a cow.

Still, I’m going to hold off on solo runs through Moore Creek for the time being.
(better safe than devoured.)