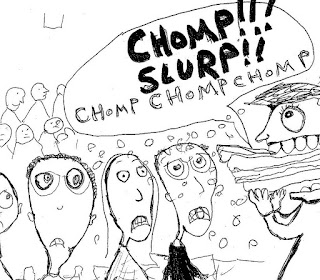 It is just my luck that the woman sitting me during the 1:10 p.m. Sunday showing of “Argo” at Century Cinemas 16 (in Mountain View) was eating an extremely loud, crunchy,  drippy, soggy, pickle-filled, oniony sandwich throughout the duration of Ben Affleck’s latest directorial effort. Every so often, the smell would die down, and I could concentrate on the enjoyable movie, a mixture of comedy, skullduggery, and old-fashioned suspense.

But just when I was getting into it, really losing myself in the film, another wave of oily stench would rise up above the crowded theater.

My row-mate noisily unwrapped and masticated her foot-long grinder, sending showers of sauerkraut,  secret sauce and ham all over the people sitting near her.   One man sitting close to me was so thoroughly festooned with lettuce and onions that I could not make out his facial features.  “Argo” was a fine movie,  based on what I saw of it. Too bad I could not hear the dialogue through the crunch of her toasted sandwich. Did the hostages get away? I passed out before the second half.